Together with the State Fair of Texas and Dallas ISD, Junior League of Dallas distributed a commemorative Juanita J. Craft coloring book to more than 10,000 students across Dallas.

“Juanita Craft said at one point that trying to ‘lift the feeling of dignity in the minds of young people’ was one of her lifelong inspirations,” says Susanna Carrillo, Juanita J. Craft Civil Rights House Committee Chair for the Junior League of Dallas (JLD). “It’s also a big part of her legacy.” 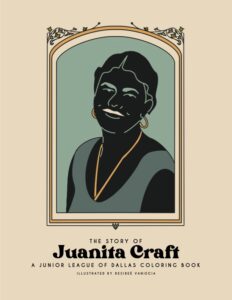 The cover of the Juanita Craft coloring book

In October 2022, JLD announced its partnership with the State Fair of Texas and Dallas Independent School District (Dallas ISD) to print and distribute a commemorative Juanita J. Craft coloring book to more than 10,600 fourth-grade students across 153 of Dallas ISD’s elementary campuses as part of their Texas History curriculum. The coloring book was distributed as a special lesson plan on the pivotal role Juanita Craft played in shaping the history of civil rights in the state of Texas and beyond — including the desegregation of the State Fair of Texas and her work to integrate Dallas ISD.

“Like many educators will tell you, students need stories that are mirrors and windows: stories that reflect them and stories they can look through to expand their understanding of other people’s life experiences,” Carrillo adds. “Whether the story of Juanita Craft is a student’s mirror or window, the example of her remarkable life and how she overcame significant challenges and contributed to her community is a great asset to students and to keeping her legacy alive.”

Illustrated by Dallas-based contemporary painter and educator Desireé Vaniecia, the coloring book will help this generation of students learn the important story of Craft, her contributions to Dallas, and her way of creating positive change in her community.

As a prominent civil rights activist and the second Black woman elected to the Dallas City Council, Craft fought against racial discrimination and segregation in Dallas and across the country. In 1955, she organized a protest against the State Fair of Texas’ segregationist policies and continued to organize a protest every year until the State Fair was integrated in 1967. To honor Craft’s 12-year fight for desegregation, the State Fair of Texas sponsored the printing of the coloring book, which was commissioned by the League.

“Sharing the story of Juanita Craft with more than 10,000 students, their educators in Dallas ISD and their families is an incredible opportunity,” Carrillo says. “At the end of the book, it asks students to consider how they can create positive change in their community. I hope that students and families across Dallas see Juanita Craft as an example of an ordinary person who contributed to extraordinary change and are inspired that they can too.”