The Dallas Business Journal’s 40 Under 40 awards recognize professionals who excel in their organizations and make a difference in their community, something this year’s honorees say their time with the JLD helped them achieve. 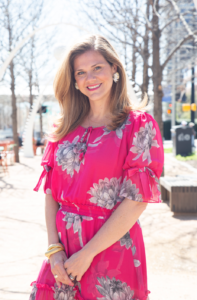 Murphey Sears, Chief Development Officer for Dallas Children’s Advocacy Center (DCAC), is a sustaining member of the League included in this year’s DBJ honors. She credits the JLD for giving her a leg up during her early years in the nonprofit sector. “I was doing my placement with Genesis Women’s Shelter when their volunteer coordinator position became available.” She said her social service experience helped her get the job. She went on to work for Texas Women’s Foundation and has been with DCAC for four years.

The recognition comes after a particularly difficult year. Like many, Sears said she spent most of 2020 working from her dining room table at home with her four small children. As a fundraiser, she had to find innovative ways to introduce people to DCAC’s mission without being able to directly engage them during the pandemic. But her biggest concern was not a decrease in donations but in the agency’s clients, which meant children were unable to safely report abuse. “That left me with a pit in my stomach. It was a difficult burden to carry while we were all at home. Not everyone’s home was safe.”

Sears says it’s hard to not be involved with the League after completing her Active years because of what her time serving has taught her about the needs in Dallas County. She also shared that from an agency’s perspective, JLD volunteers are some of the very best you can get. “I implore my community coordinator at DCAC to utilize the League’s volunteers,” she said, adding that the League’s agencies know they’re getting “highly skilled, highly trained and highly motivated volunteers” that return year after year.

Sears says she measures professional success on the happiness she feels while serving the community and keeping children safe. “But above all, my biggest measure of success is that I am able to do something that makes my children proud.” 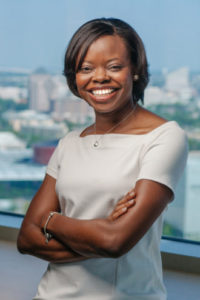 Rea Foster, Executive Director of Teach for America Dallas-Fort Worth, is in her sixth Active year with the League. An attorney from Houston who came to Dallas by way of D.C., Rea says she loves being in service to her community.

“Getting this award coming out of the past year is really affirming,” Foster shared. She took on the executive director role at the beginning of 2020 and spent her first year leading her team through both the pandemic and a national social equity movement. “As a woman of color, to experience that personally and to lead a group of people that are very driven by equity and racial equity, there were a lot of layers and complexities.” She did so while also navigating the education of her young son.

Her favorite placement was utilizing her legal expertise as a Court Appointed Special Advocate with Dallas CASA. She says that the League is also a great place to explore new areas of interest and develop skills in other industries members might not have otherwise tried. “If you work professionally in marketing, it’s hard to try out finance at your job. But the League creates an opportunity for you to do that,” she says. She encourages new members to try a balance of In-League and Community placements to find which spark other interests.

Foster says the greatest aspect of serving in the League for her has been relationship building. “Connecting with other like-minded women has aided me both in my career and personally. The relationships have been invaluable to enriching my life.”

As for what’s next for Foster, she has bold new goals to advance educational achievement and equity through Teach for America. Her 10-year goal is to double the number of children that are achieving their educational milestones throughout the DFW metroplex. “We imagine a world where twice as many 3rd graders are reading on grade level in 10 years from now than they are today. It’s going to bolster our city to new heights.” 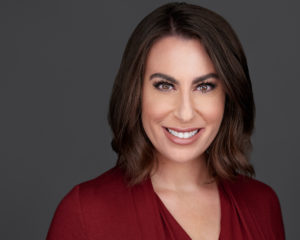 Jayci Giaccone is in her seventh Active year with the League and is the Director of Development for Essilor Vision Foundation (EVF). Essilor is a nonprofit with a mission to improve children’s lives by improving their sight. “We call it an invisible problem. If you’re hungry, you know that you’re hungry. If you’re cold, you know that you’re cold. But children do not know if their eyesight is bad or what they are seeing is not normal.” It is debilitating for children in their formative years, she said, adding that 80% of what we learn is visual. It isn’t uncommon for the foundation to encounter children sharing glasses with siblings, parents or grandparents in some households.

When she joined Essilor, the organization was serving 100,000 children and their families with vision services they’d otherwise be unable to afford. Today, the organization serves more than 500,000 families nationwide. Her nomination for the DJB’s 40 Under 40 award says that’s thanks to Giaccone’s increased fundraising, which included increasing annual event donations from $50K in 2015 to over $1M in 2019.

“I really just look at my responsibility to allow the people who are focused on solving our mission to do their jobs and not have to worry if they’re going to have enough money. I really take pride in being able to take that burden off of their shoulders.” Giaccone says she hopes to work herself out of a job, which would mean that the organization’s mission had been accomplished. Since 2015, EVF has been able to eliminate $1.7M in debt and invest $2M into the sustainability and future of the organization.

She says the League is a great way to spend time in a charitable way, but that members also have something to take away from their experience: personal or professional growth in their area of interest. She recommends members identify which skills they want to build personally or professionally and look for placements that require those skills. “We are a teaching organization,” she said, “you benefit from learning from intelligent women who have been there before you and are willing to come together to continually improve upon what exists today.”

Serving on the League’s Research and Development committee helped Giaccone see things from the perspective of the funder for the very first time. “It helps me become a better fundraiser because it puts into perspective what our local community is interested in supporting and why.”

Giaccone says she joined the League to connect with others who have a heart to serve. “I love the diversity of the Junior League of Dallas. The strength of JLD being the size it is allows for all different types of women to come together from all different backgrounds, walks of life and life experiences. It makes us all stronger as individuals because we’re learning from each other and hearing other perspectives that we might not be exposed to which is invaluable.”

Interested in becoming a JLD member? Find out more.

Promote Voluntarism, Develop the Potential of Women, and Improve the Community Through the Effective Action and Leadership of Trained Volunteers